Europe has taken center stage in the eyes of much of the world in recent months as it deals with refugees and migrants. But its past may be just as useful for lessons about political and economic turmoil there and in the United States today. We spoke about the lessons of history with Professor Elizabeth Drummond, associate professor of modern Central European history in the Bellarmine College of Liberal Arts. She was interviewed by Editor Joseph Wakelee-Lynch. 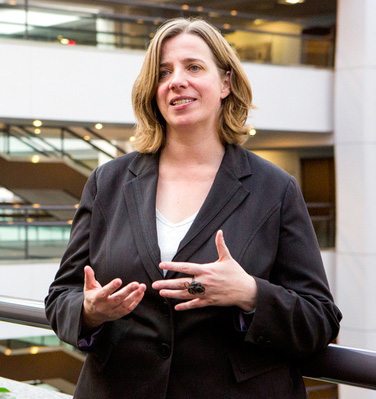 Elizabeth Drummond teaches course on modern Central European history and specializes in German and Polish history. She has published articles on subjects ranging from the German-Polish national conflict in the late 19th and early 20th centuries, including on the role of women in nationalist mobilization and the gendering of nationalism, on the position of Jews in the German-Polish national conflict.

Some political observers have begun to suggest that politics in Europe and the United States are beginning to resemble that of Europe in the 1930s. Is that an unreasonable comparison?
We have to be careful not to overdo the comparison. But, to be sure, there are similarities we can draw, particularly with Weimar Germany. By the early 1930s, Weimar Germany’s parliamentary system ceased to function as intended. That was because of a fragmented party system and the polarization of politics that prevented the formation of effective governing coalitions. Now, we don’t have a parliamentary system, and we do not have proportional representation. We have only two [major] parties. But what we see in Congress is a certain inability to govern, or at least to do so only with great difficulty. That’s been illustrative of a much broader polarization of our own politics into extremes where there is a lot of recrimination and an unwillingness to work together toward issues.

What is the source of the economic anxiety many people feel when, in fact, many economic indicators are strong?
I think it’s a disconnect between the macro and the micro. The economic indicators that are doing well are economy-wide measures that don’t really get at the experiences of the individual. Individuals are experiencing wage and income stagnation. At the same time there is an increased cost of living, so people are seeing their purchasing power decline, and they’re seeing their long-term economic health imperiled. The data on class disparity and the widening of the income gap certainly show that that gap is becoming acute. So there is political discontent and economic anxiety.

When the Nazis scapegoated the Jews as a source of Germany’s problems, did they exploit a current of anti-Semitism, or did they introduce a notion that until then had had little credence?
Those forces were present in Germany but also throughout Europe, and the United States for that matter. In the late 19th century, however, you wouldn’t necessarily have picked Germany to be the place where an anti-Semitic party would come to power. German Jews were largely assimilated and integrated into society. In the early to mid-1920s, the Nazis were a tiny splinter party that had little support. The turning point was the Great Depression. If you look at some of the rhetoric that the Nazis used in election campaigns of the 1930s, they downplayed the anti-Semitism somewhat to play up the language about economic insecurity and anxiety. There are a number of studies that show that after the Nazis took power, their more virulent and violent outbursts of anti-Semitism were actually rather unpopular. So they called off the boycott [of Jewish businesses] in 1933 after a couple of days. There also was a reaction to Kristallnacht, the November 1938 pogroms against the Jews. But the Nazis racial ideology and anti-Semitism were always there. The Nazis instead pursued legal exclusion — the legal marginalization of Jews — stripping them of jobs, economic well-being and, eventually, their citizenship. It was a legal way to set the stage for what happened later, the mass murder of Jews.

As a historian, do you think scapegoating has always been with us, and thus isn’t a sign of crisis, or is scapegoating unusually virulent today?
I think the answer is yes and yes. To a certain extent, the desire to blame external factors for one’s own personal situation is a natural defense mechanism. But there’s something particularly alarming about the racist and Islamophobic rhetoric that we’re seeing today. Hypernationalism, racism or xenophobia is not unique to the United States, unfortunately. Calls for a registry of Muslims or to expel and deport immigrants from Central America or refugees from the Middle East are reminiscent of many images we conjure of the Nazis in the mid-20th century. I think this is something more than normal. There is an ideology starting to brew about what the nation is and how we ‘purify’ it, regenerate it and make it great again. The language of “We’re going to take back our country” is more than scapegoating.

Do you see signs of hope amid what may be heightened social, political and economic turmoil?
Sometimes it’s hard to see hope, but as a historian who studies Europe, I see hope in the protests and demonstrations in Poland against the ultranationalist Law and Justice Party, which is moving in a very dangerous and scary direction. I see hope in Germany in protests against the right-wing PEGIDA (Patriotic Europeans Against the Islamization of the West). In the United States, we’re seeing a lot of young people get active and involved. I look around this campus and see a lot of young people who are actively involved in efforts to seek solidarity with the marginalized and the Other, rather than in efforts to demonize them. That’s a hopeful development.