Against my better judgment, late last spring, I found myself corralled onto a panel — an uncomfortably solemn affair that carried the weight of a wake. There was no body lying in repose, only a symbolic one: the world as we had known it. There we sat: three journalists who for much of our busy careers had reported wide-ranging stories about the lively arts — books, pop culture, fine art, and music that crossed borders and genres. We’d been gathered to sort through shattered infrastructure — not just the art world’s. As journalists, we would be turning over the detritus of our own.

That “better judgment” — my own “plan” — was still in flux. I was no expert. Nonetheless, we waded deep into the murk: market crash, vanishing job categories, lost homes, fractured partnerships, both professional and personal. Half in jest — but only half — the moderator turned to me and lofted a question: Because I’d been focusing on long-form “process stories” about artists and the long trail of their working lives, he wanted to know if I might have anything — “anything at all” — optimistic to offer. Laughter skidded across the room. Designers, musicians, writers, students — a sea of scarves, plaid and denim — perched at the edge of their seats. I referenced an interview I had recently conducted with Los Angeles-based assemblage artist Michael Massenburg, who through the years had juggled all manner of rent-money side businesses — making T-shirts, DJing and, for a time, criss-crossing the vast city driving an airport shuttle.

“I always say that the economic downturn didn’t affect some of us who are artists because, really, this is how we already live,” he’d told me. “We already are dealing with uncertainty, so we are always looking for what’s coming/happening next to grab it. Whenever something landed, it was: ‘Let me work with this.’ So in many ways those of us who had always really scrambled, we had a head start.”

Massenburg, who grew up in South Los Angeles bearing witness to the city’s two brutal and transformative urban unrests, is now best known for narratively complex, emotionally charged works of art — paintings, assemblage work — that reflect the city’s socio-political shifts, its conflict, uprising and renewal. His assemblage pieces in particular, the product of happened-upon detritus, rescued and remade, reframe the stories of marginalized neighborhoods. He’s traveled the world, sold pieces to major collectors and been part of international retrospectives. 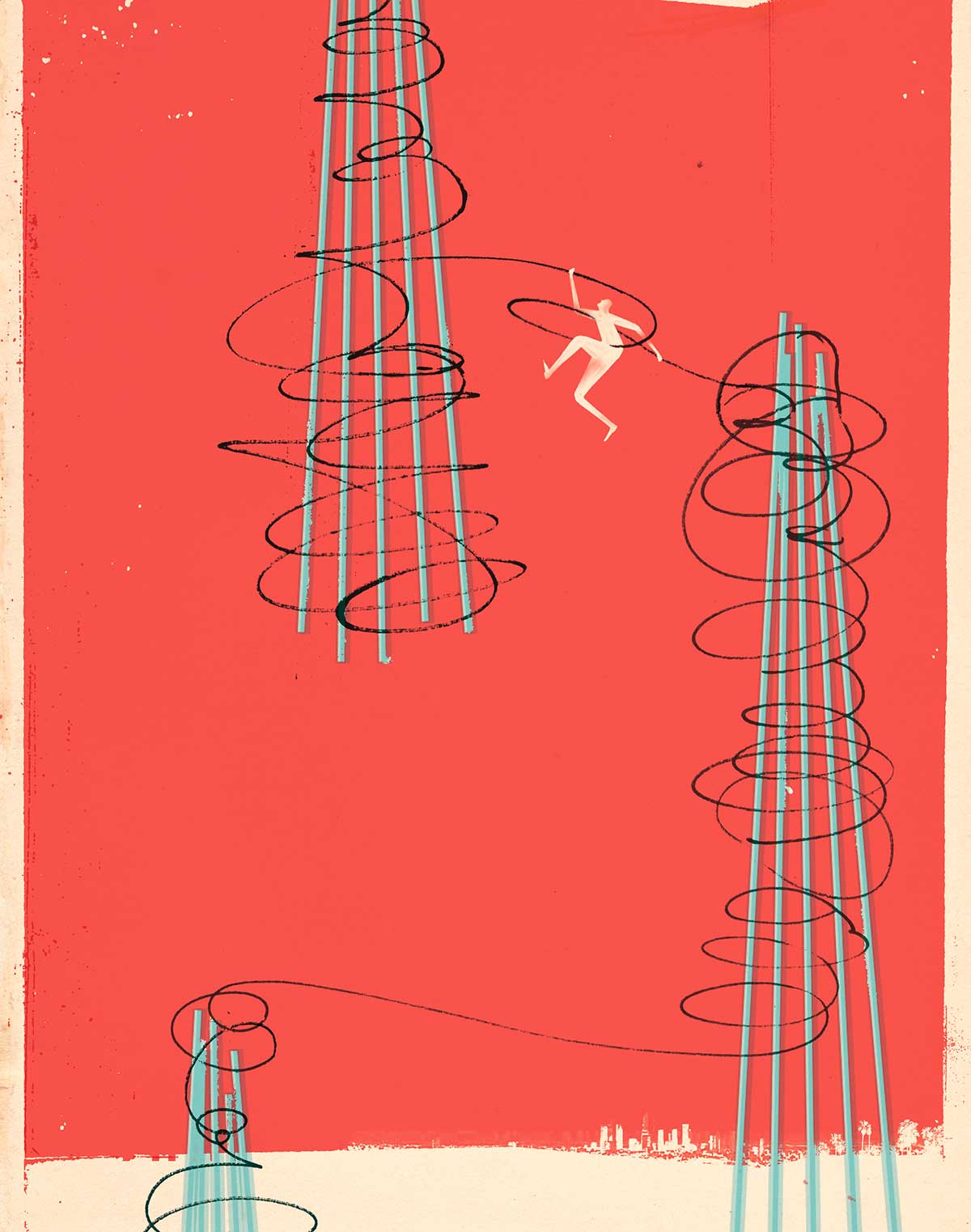 None of this was part of a plan Massenburg could have mapped. Back then, in the ’70s, when he was finding his way, he wasn’t calling himself an artist. Perhaps the title seemed a luxury, or maybe it just felt strange to say the word out loud, given the texture of life in and around his old neighborhood, its residents still struggling with failing schools, street violence, pernicious unemployment. Even still, he remained open, always found pathways into creative work and had a keen ability to pivot from one learning experience to the next — working in an art store, designing and embroidering custom clothing and logos, including the game jerseys for the Los Angeles Clippers. He found time to teach workshops for hospitalized children, helping them to work through their emotions, which were jagged, huge and abstract.

Stumbling upon a workshop at the Watts Towers Art Center, Massenburg found himself wandering back into his own history: “People painting. Listening to jazz. And there was the great artist John Outterbridge, working with no, counseling, students. Not giving us answers,but asking questions: How did I miss all this? How could all this be happening just minutes from my house?”

Intersecting with the Watts Towers and Outterbridge, an African American man who embodied art’s larger political possibilities and hinted at Massenburg’s own possibility, helped to clarify things. That pull was real. The door Massenburg needed to walk through appeared not when he asked for it, but when he was ready for it. He didn’t know he was even looking until he found it: a spirit home.

For some time, I’d been shadowing artists like Massenburg, people who were expert at reading possibility in a mere gesture and reacting in the moment. I had been cataloging what sort of creative benefit bloomed out from a chance encounter — a serendipitous discovery, an open path or fresh new sense of self. But now, with so much infrastructure upended, their facility to do so resonated even more. As life became increasingly difficult to parse when the planned-for scenarios evaporated — or simply didn’t arrive — so many were looking for not just comfort but real tools to find their own “what’s next.”

We want to map a plan — a life — that’s what both our conscience and the culture tells us; a life/plan that nudges us toward “success” and ultimately a precisely articulated and fully realized you. The trouble with this premise is that what we already know too often obstructs what we might come to know — if we’re open to it. That’s the juncture where chance lies — and where serendipity — and often the greatest possibility can step in.

We think we can outline a foolproof strategy, one that keeps us on track, moving forward, but things break, sever, snap and shatter all of the time. Plans fizzle, promises are broken, things fall apart. Both life and the language we use to describe our derailments and defeats tell us that.

Planning, however, doesn’t stave off the inevitable detours that present themselves: There are moments when patterns are broken for us, and moments when we choose to break them. What happens when we walk into that void, that open question, is the first step toward the unknown and where faith and chance can take us.

As a journalist who writes about people who make elegant, jaw-dropping leaps — creatives who ultimately conceive beyond-category art, music and food, or design vibrant community landscapes or networks — I see many who seem to share a key trait: the ability to pivot, to “see in the dark.” The darkness in this case is uncertainty: blind turns and difficult passages that we all must navigate at some point to find our way to the next phase, chapter, summit. Why, I wondered, are some better at the pivot than others? That facility begins with feeling comfortable in the space of the unknown.

Near the end of Pico Iyer’s slim, astute meditation titled “The Art of Stillness: Adventures in Going Nowhere,” the essayist explores the importance of framing calamity: “It’s not our experiences that form us, but the way we respond to them; a hurricane sweeps through town reducing everything to rubble and one man sees it as liberation, a chance to start anew, while another, perhaps his brother, is traumatized for life.”

Iyer’s words reassured me that what we are handed is not just a measure of our mettle — how we move forward — but that the unexpected also can limit or enhance our life’s possibility. We choose. 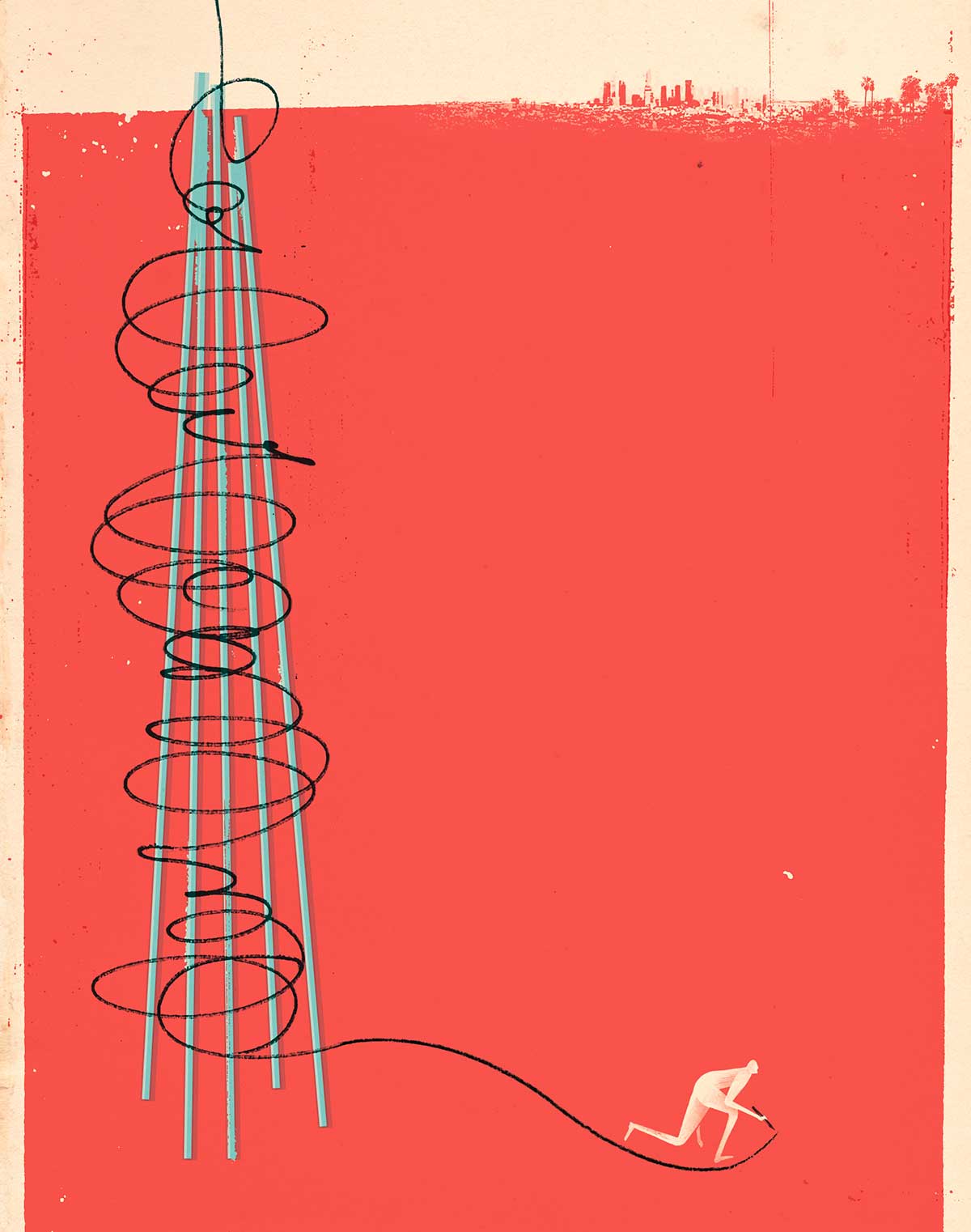 I saw, much more clearly, that the stories I’d been assembling weren’t necessarily a catalog of successes. Rather the artists’ arcs I traced suggested that the real journey begins with instances others might categorize as dead-ends, failures, even tragedies: a deportation, a wife’s near-death experience, a diagnosis of a rare blindness. Instead of accepting an impasse, they understood a setback as a threshold, not an end, but a beginning. The ability to shake free from an outdated dream or shed a fixed desire — be it a job, a hunch or place in the world — and cultivate new inspirations is not a facility we often honor or celebrate. We should. Recalibrating — or, as one subject calls it, “bounce” — is critical to survival. Success, then, isn’t about achieving static goals or checking items off a list. It’s about mastery, acquiring insight and achieving breakthroughs.

We live in a moment of “vision boards” and Post-it affirmations — “See it. Be it.” But we forget that just as important as what we wish for ourselves is gleaning the insight that may seem beyond our imagination. That big life we crave, the one larger than we can conceive, is often the consequence of risk, misadventure and recovery. As one subject finally came to understand it: “Don’t look; leap. Trust the dark. Trust what you’ve cultivated inside.”

In American roots music — jazz, blues, zydeco, bluegrass — there’s a term called “jumping time,” a moment that inevitably reveals itself on the bandstand. The singer perhaps forgets a verse, or the trumpet player, distracted, stumbles, barges in too soon, and the band must work together to pivot, restore order, move to the next line and not get jangled. It’s about moving forward: salvaging not just the moment, but the possibility for the one that follows.

I think about Massenburg and his own “salvaging” — the poetry of the pivot — finding not just a use for the stumbled upon and tossed aside, but a new narrative for it: “I remember John Outterbridge saying to me that art can be anything you want it to be. Even your life. So when I think about how I got here — it wasn’t straight-line.”

That left or right turn, it’s all about jumping time — sliding to the next spot, finding the treasure in the detritus, saving the moment. You can’t plan for it, just prepare.

Those beautiful dovetails in life that we watch from afar? They come with hard work and foresight: reacting adroitly, even poetically, at that fork in the road of thought, crisis and life shift is often our only control in chaos. That informed pivot — the one that takes us from disaster to possibility, the “new place” — can be the life-changing difference between simply surviving and thriving.

Lynell George is an L.A.-based journalist and essayist who covers the arts, culture and social issues. A former staff writer for the Los Angeles Ties and LA Weekly and a current columnist for KCET's “Artbound,” she also is the author of “No Crystal Stair: African Americans in the City of Angels.”