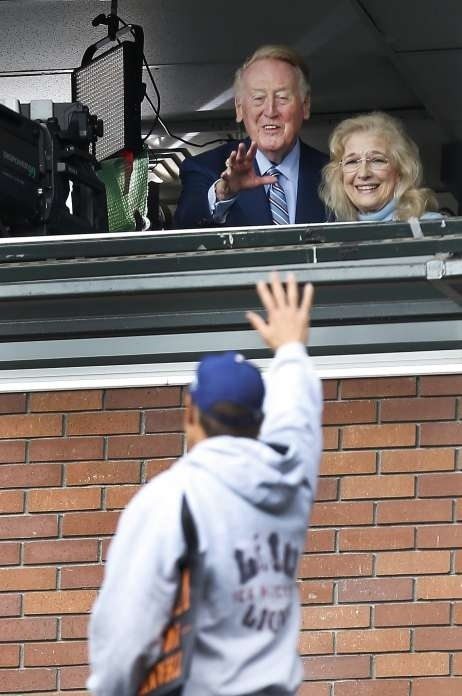 You may have seen this photo. It was taken on Oct. 2, 2016, Vin Scully’s last day as a broadcaster. The photo was distributed in at least a few publications/news outlets, and one caption stated “Retiring Dodgers broadcaster Vin Scully, with his wife Sandi, waves to a fan at AT&T Park.” To me, that one fan represents all fans, an “Everyfan” waving thanks and showing appreciation for what Vin Scully has meant to all of us. What makes the photo even more meaningful is that the Everyfan is a LMU alumnus (he’s even wearing a LMU ice hockey sweatshirt!) and that the photo was 21 years in the making. As Vin Scully would say, pull up a chair wherever you may be; here’s the story behind the photo.

I was associate director of admission at Loyola Marymount University until I retired in 2014. It was in 1995 that Vin Scully called to arrange an appointment for he and his daughter Catherine to come to my office (Catherine was looking into the possibility of transferring to LMU, and I often met with prospective students). My one regret is that I did not save the voice message that he left on my phone! I had admired him and his work for decades, and while he did not actually play for the Dodgers, I felt that he was the team’s MVP (Most Valuable Person). The three of us eventually met, and he exceeded my expectations of him as a person. I was so impressed that he was (and still is) such a loving and caring parent.

After taking care of Catherine and answering all of her questions and concerns (and she did matriculate), I turned to her father and said “Mr. Scully, I just have to take this opportunity to say that I am a great fan of yours!” His response? “Please, call me Vin, and thank you.” I was thrilled! I was now on a first-name basis with one of my idols! We then discussed baseball, his career, etc., and I asked if he would ever consider writing a book, adding that I would be first in line to buy it, especially since I loved all of his stories. He stated that while he’s been often asked to write a book, he has said that he would not since he would rather use any extra time on his hands to be with his family (now that he’s retired, he has stated that he is looking forward to spending more time with his family).

While discussing more baseball (e.g., I learned that Kirk Gibson was his most recent favorite player), Vin asked if I would like to hear a story. Of course I would! He then proceeded to say that after World War II, Walter O’Malley, then owner of the Brooklyn Dodgers, was playing golf with a friend, and the friend asked if Mr. O’Malley would be interested in selling the Dodgers. It seems the friend’s son had recently returned from the war, and was having a difficult time finding something to occupy himself. The friend was hoping that his son could become involved in running the Dodgers. Mr. O’Malley politely said no, and they continued with their round of golf. While that in itself is not a very interesting story, Vin, with a twinkle in his eye, leaned forward and asked if I knew who that friend was. When I said I didn’t, he said it was Joe Kennedy! The possibility that his son Jack Kennedy might have never gone into politics makes for a wonderful story, but what makes it my favorite Vin Scully story is Vin’s personal touch!

The meeting finally and regrettably ended, and as he and Catherine departed, Vin invited me to stop by the press box before games if I ever wish; if circumstances allowed, he might be able to say a quick hello. That was an offer that I couldn’t refuse! Over the many years since, I had a few opportunities to say hello again to Vin. On one occasion I introduced him to Matt (class of 1992), my son, and on another occasion to Denny, my brother, who was visiting from Florida; Vin immediately noticed the resemblance between Denny and me, laughingly saying, “Yes, I can see that you are brothers!” Vin was always gracious and welcoming during these visits, and for that I am most grateful.

This tribute now shifts to the present. Gary and Nona (Monteverde) Rafferty (both members of the class of 1973) are wonderful friends of my family and me, and Nona was once a fellow LMU admissions officer. Gary and Nona thoughtfully hosted my son and me at Vin’s last game in San Francisco. We were at AT&T Park when the gates opened, and we immediately went to our seats that were just four rows from Vin’s broadcasting booth. Vin was intently working as he prepared for the game. Then he took a break, stood up and faced the field. I waved my Dodgers cap to get his attention, and I reminded him of our meeting at LMU with his daughter. He immediately smiled and announced that Catherine was at the game. Then Sandi, his wife who was also in attendance, said that all of their children were there, too. I reminded Vin that he once met my son, pointing to Matt, now standing a few feet to my right. They waved to each other just as the photo (remember the photo?) was taken, unbeknownst to us. Vin then went back to work for one final day.

Vin Scully has said that God blessed him by allowing him to have a career that he loved for 67 years. Thank you, Vin, for being with us all those years, and thank you, God, for blessing us with Vin.