How would you describe the major factions in the Republican Party and how do Donald Trump and his followers fit in?
There are three factions. First, the establishment, mainstream, country club Republicans who believe in a fiscally limited government. They want small government, low taxes and low regulation, and they care less about the social issues. Then there is the religious and evangelical strain that believes deeply in the values issues. They feel they have lost on gay rights and gay marriage, abortion, family values and prayer in the schools. The third is cultural conservatives, who feel America is going away, the one in which we were the greatest country in the world with the best founding principles, and that we’re a mostly white-dominated country. They feel perhaps the most anger, and they’re the most natural base for Donald Trump. Libertarians fit in the cultural conservative group as well.

Have the major U.S. parties gone through a process of disruption before that was as turbulent as that of the Republican Party in this election cycle?
The Republican conventions of 1964 and 1976 and the Democratic conventions of 1968 and 1972 didn’t kill off those parties. The parties survived. Barry Goldwater in 1964 launched a more conservative Republican Party. George McGovern in 1972 probably led to a more moderate Democratic Party such that you end up 20 years later with Bill Clinton as a new kind of Democrat. But these contentious conventions didn’t break up the system. They were disruptions. 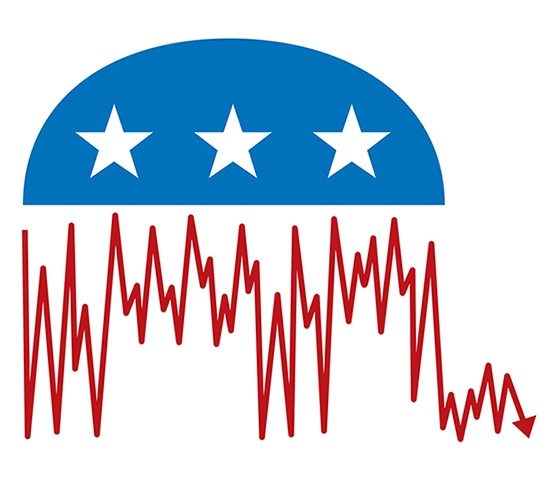 How do you describe what’s happening in the Republican Party?
There’s a major disruption going on. There is a possibility that in four or five months Donald Trump doesn’t quite win the nomination and the party gives the nomination to John Kasich, if he overtakes Trump at the convention. Then, the Trump supporters skulk off saying we’re not participating in this system. And if John Kasich beats Hillary Clinton, then that would be seen as a big blip for eight or nine months, after which we’re back to a two-party system.

Or it’s possible that Donald Trump wins the nomination and we really do have a fundamental disruption in which the Republican Party has to question what it’s about. He does so many things that seem to violate the conventional rules about how someone gets elected as a Republican. He’s such an unusual character in contemporary politics, and by contemporary I mean the last 30 or 40 years, especially at the presidential level: somebody who says things, almost irreverently or unpredictably, that go completely against the orthodoxy of the party. Would the party break up? Would it morph into something else? Well, winning cures everything. If he actually won, he would get to remake the party a little differently, I imagine.

What could those changes look like?
Some people have said if Trump gets the nomination, Republicans are willing to support him and they’re going to work with him. He may not have core values on a lot of things; they may remold him into a basic Republican with a few quirks. Or he really may have a set of core beliefs, which means he could make the party quite a bit different on several key issues: the influence of big money, free trade, when and how to use the military, immigration.

Given what’s happening in the Republican Party, do you worry about the political stability of the Republican Party or national politics?
No, I don’t worry. I expect the party will survive with or without Donald Trump. We’ve had four or five occasions of party restructuring, but we just haven’t had one in a long, long time, 100 years or so. A third party arising, a party replacing another party — that’s happened before, but it’s not clear what will happen here. But I don’t worry about the stability of the U.S. government. I think the institutions are fairly stable — the court system, the Congress and the other institutions. Even if the Republican Party broke in two — the angry cultural faction and the mainstream business faction — I don’t think that would threaten the stability of the political regime at this point.