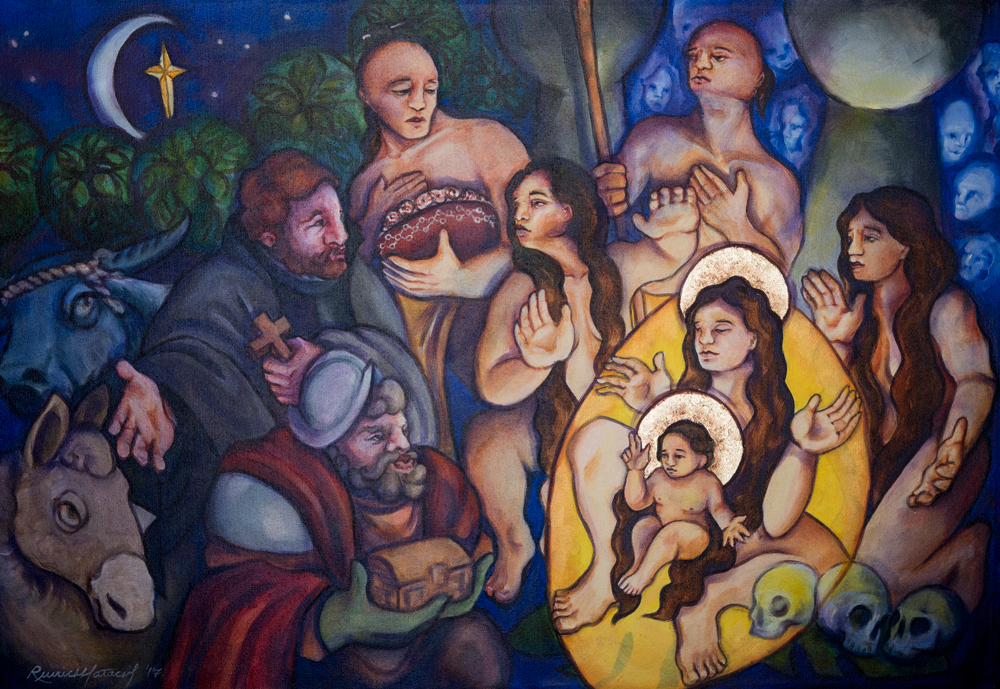 Ralph Eurich Patacsil ’18 is a senior in the College of Communication and Fine Arts whose major is studio arts, with an emphasis on graphic design. Patacsil was born in Tamuning, Guam, a U.S. territory that was once a Spanish colony. In the fall 2017 semester, Patacsil enrolled in a course called Meeting Christ in Faith and Art, taught by Professor Cecilia González-Andrieu, a professor in the Department of Theological Studies. For the class’ final assignment, students were required to make a work of art related to themes of the course. Patacsil painted a Nativity scene, titled “Puengen Yu’us (Night of God),” that combines elements of Spain’s colonial legacy with those of Guam’s native people, the Chamorro. Patacsil was interviewed about his painting by Editor Joseph Wakelee-Lynch.

Why did you choose to paint the Nativity?
First, because of the time of year: Christmas. Christmas in Guam is very significant, with lots of celebration. About 85 percent of the population is Catholic. That’s something that we trace to our Spanish roots. Setting up a Nativity scene is called a belen, and it’s a tradition we inherit from the Spanish. Second, since Guam is going through a decolonization process, anything that we inherit from the Spanish becomes a point of tension. So, [my question] is how do I reimagine that, or how do I enculturate that tradition so we can heal, or bridge the gap between our own cultural roots and the point of conflict.

About the painting—there are three men to the left: a priest, a conquistador and a man with a basket.
They represent the three wise men.

The priest and conquistador are clearly not native to Guam, and they're easily recognizable. But Joseph wasn’t very recognizable to me.
I wanted to present him as a native chieftain. Not only are the Spanish coming to worship Jesus in the painting, but also the native community at large. Ultimately, I’m targeting division. I don’t want there to be division. So, that’s my ultimate goal: for the painting to act as a piece of healing, to help the community take pride. As brutal as our colonized past was, the beauty of Chamorro culture today is in being able to enculturate the colonists’ practices. This speaks to the indigenization of the colonizers’ cultural practices in a way that fits the need of the community.

Who are the women behind Mary?
They aren’t anyone in particular. They’re present as a nod to the matrilineal culture of the Chamorros. When the Spanish came, their society was patriarchal, and the system of matrilineal inheritance was replaced. The women represent a reclaiming of the culture. Also, in most images of the Nativity, Mary is the only woman present. By having the other women there, I’m re-contextualizing the importance of women in the overall story of who Jesus comes to save. It mirrors Jesus’ community. Some of the closest disciples to him were women — Mary Magdalene and Veronica, who wipes Jesus’ face. We forget sometimes that some of the most prominent figures in his life were women.

What is the significance of the pillars in the background?
Aesthetically, they replace the frame of the stable [in the Gospel story]. But in ancient times, pillars supported huts. Also, they mark graves where the dead are buried. You see them in ancestral sites. Prior to colonization, the Chamorros worshiped their ancestors. A lot of Chamorros today still believe the ancestors play a role in our lives. My hope is that that doesn’t need to be a point of conflict with the Catholic faith because we believe in the resurrection of the dead, and we pray to the saints.

What about the skulls in the lower right of the painting?
Sometimes skulls allude to the saying “memento mori” — “Remember that you will die” and the idea that the true saving power of Christ is in the Resurrection, it’s is not here in this physical world but is in life after death.

Animals are always found in nativity scenes. Is it a nod to custom that you included them?
Donkeys were a work animal brought by the Spanish. The other animal is a carabao, a domesticated water buffalo. They came from the Philippines. The carabao came from the colonizer, but it is a very prominent, beloved symbol of Chamorro culture today. It doesn’t have negative connotations.

I want to ask about the light in the painting. Is the crescent moon symbolic?
The moon and stars play special roles in Chamorro culture. They use the moon to chart out the year, in lunar cycles and in fishing cycles. And, of course, a lot of islanders used the stars to navigate.

In this nighttime scene, even though the moon and stars are depicted, Mary and Jesus are the brightest elements in the entire painting.
They are the figures lighting the scene. That’s a message in itself.