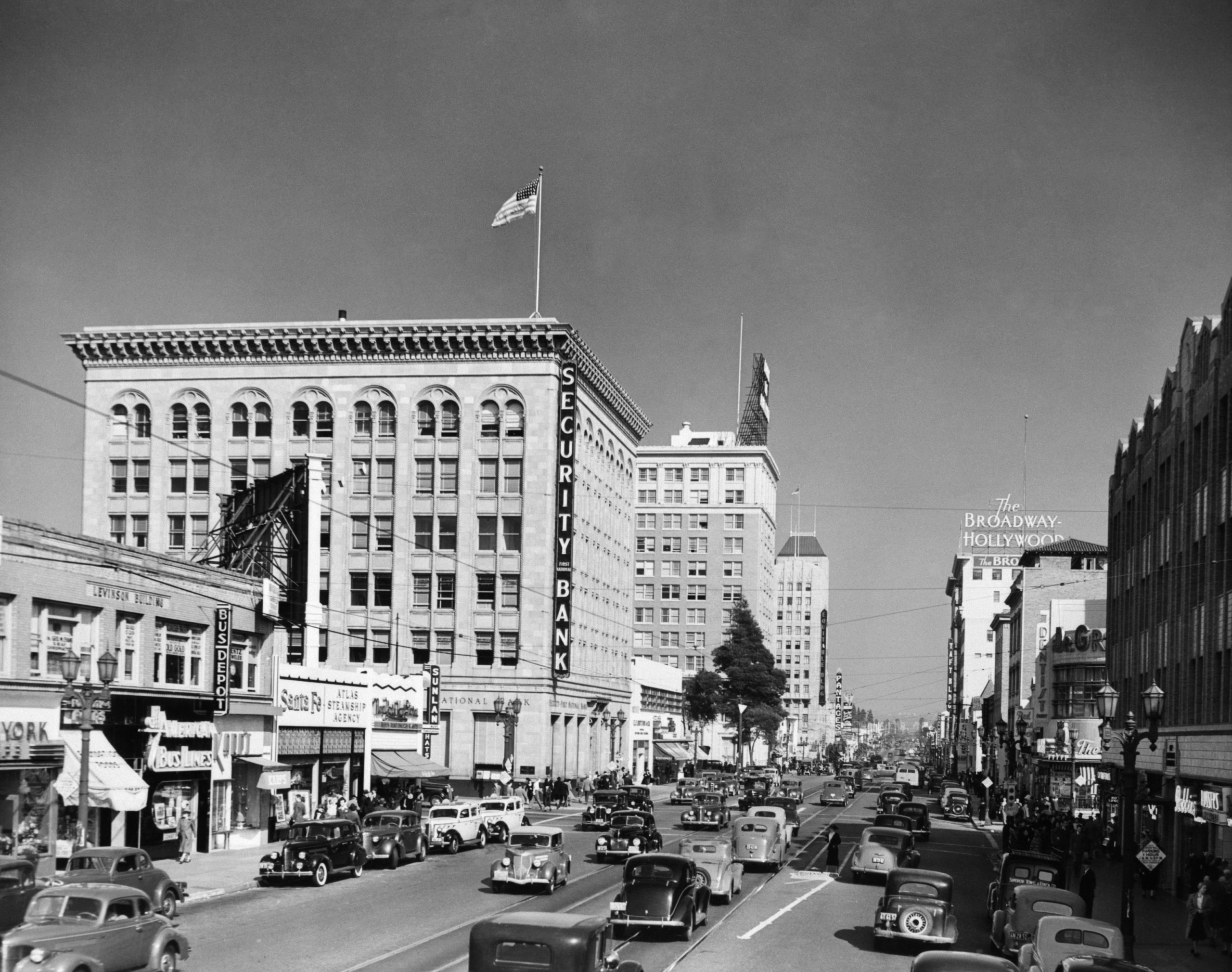 Los Angeles long has been a magnet for visionaries. The city has attracted innovators in need of a new physical or intellectual territory to pursue their ideas as well as loss-avoiders desperate to leave one life behind and launch a new one. In his new book, “The Mirage Factory: Illusion, Imagination, and the Invention of Los Angeles,” writer Gary Krist looks at L.A. history through the lives of three people who shaped this city and region through their imagination and talents: self-taught engineer William Mulholland, enterprising evangelist Aimee Semple McPherson, and movie mogul D.W. Griffith. “The Mirage Factory” is Krist’s third book in an unusual trilogy focused on major cities, including Chicago and New Orleans. When Krist came to Los Angeles in May on a book tour, Lynell George ’84, a leading chronicler of life in the City of Angels, interviewed him, and again by email after he left, about L.A.’s heritage of creativity, entrepreneurialism and dream-casting.

What can we see in the early period that allowed L.A. to draw such a creative outpouring? Why don’t we think of Chicago in New Orleans in the same way?
I wouldn’t say that there was any dearth of creativity in Chicago and New Orleans during this period (the first few decades of the 20th century). Chicago, after all, was trying to implement Daniel Burnham’s ambitious Plan of Chicago, a landmark of modern urban planning, and New Orleans was busy inventing a little thing called jazz. But I agree that, for creativity across the board, Los Angeles was in a league of its own. It may have had something to do with the fact that L.A. was in its adolescence at this time; granted, it already had a longish history as a small place, but by the turn of the century it had just gone through its earliest significant growth spurts. New Orleans, meanwhile, was a much more mature city in 1900, and Chicago was already an economic powerhouse. But in L.A. there was still a sense that the city was not yet a fully formed thing, and that there was space and freedom enough to make it whatever the mind could imagine and the arm could build. Being far from the population centers of the East and Midwest also gave it a certain freedom from entrenched attitudes and traditional power hierarchies. And since the city’s location had so much working against it, a certain amount of creativity, imagination and ingenuity was more or less required to make things happen.

LMU Magazine recently ran a feature titled “Hollywood Caste”about the Southern roots of the Hollywood film industry that featured D.W. Griffith. What aspects of his Southern heritage did he bring with him, and in what ways did it shape Hollywood as well as his own films?
Griffith’s self-image was definitely bound up with a family mythology that sounded familiar themes of Southern nostalgia. Griffith claimed that his once-great Kentucky family (descended from a line of Welsh warrior kings!) had fallen on hard times because of the Civil War. His father, “Thundering Jake” Griffith, had fought as a colonel for the Confederacy, but by the time D.W. was born in 1875, the struggling family was living in one of the outbuildings on their former estate. Nonetheless, the image of an antebellum Southern paradise of honorable men and virtuous women was strong in Griffith’s outlook, and it carried over into his work. This was explicit in his most famous (and famously problematic) film, “The Birth of a Nation,” but more subtle in his other films, most of which were invested in the notions of virtue rewarded and honor ultimately triumphing over perfidy. I think a lot of very early Hollywood films — not just Griffith’s — were selling this particular vision, at least until the events of the 1920s made everyone a little more cynical about such ideas.

Is there a religious or spiritual imprint still discernible today specifically on L.A. because of Sister Aimee Semple McPherson’s legacy? Did her success shape the way the Catholic Church decided it needed to operate in what was then an environment of missionary work in L.A.?
The Angelus Temple remains a force in L.A., both as the headquarters of the Foursquare Church and as the Dream Center, its outreach ministry aiding the poor, the homeless, the addicted and the displaced. And the International Church of the Foursquare Gospel is robust, numbering over six million members in more than 50,000 branch congregations worldwide. As arguably the first megachurch in the U.S., Angelus can also lay some claim to that legacy as well. I’m not really sure how specifically the Catholic Church responded to the challenge presented by Sister McPherson. I do know that the mainstream Catholic and Protestant clergy at first welcomed her — until her wild success created a sense of competition for churchgoers. I understand that in recent decades, though, Catholicism and Pentecostalism have come to a more fruitful coexistence, due in large part to the rise of Latino Catholicism, especially in L.A. I remember reading somewhere that more than 50 percent of Latino Catholics now identify as Pentecostal or charismatic, which I found astonishing.

How did that first wave of L.A. boosters interact with the region’s early settlers — specifically, the Spanish, African American and Mexican population? And how did they ultimately shape/curate the image of L.A. for the world?
Certainly L.A. boosters of the early 20th century loved the idea of the city’s Spanish and Mexican past and used a highly romanticized version of the mission era to sell an image of the city to tourists and would-be new residents (usually neglecting to mention that the majority of the pueblo’s first settlers were of at least partial African ancestry). But the boosters emphasized that this legacy was in the past, and that the new Los Angeles was a kind of “Aryan city of the sun,” lacking (as Charles Fletcher Lummis wrote in 1895) “the ignorant, hopelessly un-American type of foreigner which infests and largely controls Eastern cities.” Was this a curated image? Definitely. Until the 1920s and later, L.A. did have relatively small populations of Latinos, Asians, and African Americans, but these populations were definitely present, vital and growing, even if the white establishment preferred to airbrush them out of the picture.

In your book you examine that booster-conceived “White Spot” image — the depiction of L.A. as America’s ‘great white spot.’ There is a long history of displacement here — people of color being removed, stories of neighborhoods being rewritten. You mention Sonoratown and the fate of the city’s Chinese population. We are certainly feeling the echoes of that today. What were other examples you came across?
Official L.A. was never shy about rearranging neighborhoods and displacing the city’s less powerful populations in order to accommodate. Chinatown and Sonoratown were probably the most visible examples, when more room for a built-up downtown was needed early in the century, but there was no shortage of others. Of course, many, many cities have histories of what you might call “neighborhood reengineering,” with residential red-lining, restrictive covenants, and other efforts to establish or adjust borderlines. And then there was the Mexican Repatriation of the 1930s, although L.A. was certainly not the only city engaged in that attempt to remove an entire population deemed undesirable. Today’s examples of gentrification (the echoes you’re referring to, I think) are less draconian and arguably less overtly an act of conscious civic intent, but the effects on neighborhoods can be similar.

You touch on Biddy Mason and her reinvention in Los Angeles — escaping slavery and becoming a real estate entrepreneur and philanthropist. Were there other stories you gathered about African Americans relocating to seek greater possibilities that readers should know more about?
Of course, the really large wave of African American migration to L.A. from the Jim Crow South came later than the period I write about, but there was already a small but robust black community in the city during my era, when L.A. was known as a “safe haven” for African Americans (though, alas, that notion was contradicted by some Angelenos’ actions numerous times in the early 1900s). Charlotta Bass, who with her husband published a weekly newspaper called the California Eagle, was another fascinating story. She was born in South Carolina (in 1874) and went north as a young woman to Providence, Rhode Island, to work in journalism. Then, like many people, she moved to Los Angeles “for her health” and started working for the Eagle. By 1912, she and her husband were running the paper, making her the first African American woman in the country to do so. She was also very active politically and was even nominated for vice president on the Progressive Party ticket in the election of 1952.

While L.A.’s narrative (and L.A. itself) relies heavily on water and the creation of William Mulholland’s aqueduct, oil was a significant as well, “one of L.A.’s early success stories,” you write. Was there anything surprising that you learned about Edward L. Doheny —especially these stories that turned homeowners into small-time oilmen?
So much of writing a book like this is deciding what you have to leave out — or cover briefly — in order to keep the narrative manageable. Among my other regrets was having to subordinate the oil story. I actually did consider having a fourth thread in the book (an oil narrative starring Doheny), but I decided that I was already pushing my luck weaving together three different narrative lines. So I covered the rise of the oil industry fairly briefly in one of my background chapters. That meant I couldn’t tell the juicy story of the murder-suicide of Doheny’s son Ned and his secretary, Hugh Plunket. Plunket was the alleged murderer/suicide (both men had been implicated in the Teapot Dome Scandal, and Plunket was said to be mentally unstable), though doubts remain about what really happened.

L.A. has traded famously on its visions of Arcadia and Utopia. In certain ways these seem to be the most persistent “mirages” of all. In your research and visits here, where have you seen vestiges of this preoccupation in contemporary Los Angeles?
A lot of ingenuity and imagination was necessary to create a major city in a location as geographically disadvantageous as L.A.’s. And I think that this effort left a legacy of creative problem-solving — the utopian notion that we can engineer an ideal place for ourselves — which persists to this day. If you look at what’s going on in this country now, so much of the progressive leadership on important issues is coming from California generally and L.A. specifically. Universal health care, sanctuary for immigrants, even large-scale desalination to supplement water supplies — all of these ideas for creating a better world are emanating from the cities of what used to be called “the Left Coast.” And we’ve seen in the past how mirages, with the right kind of effort, can become indelibly real.