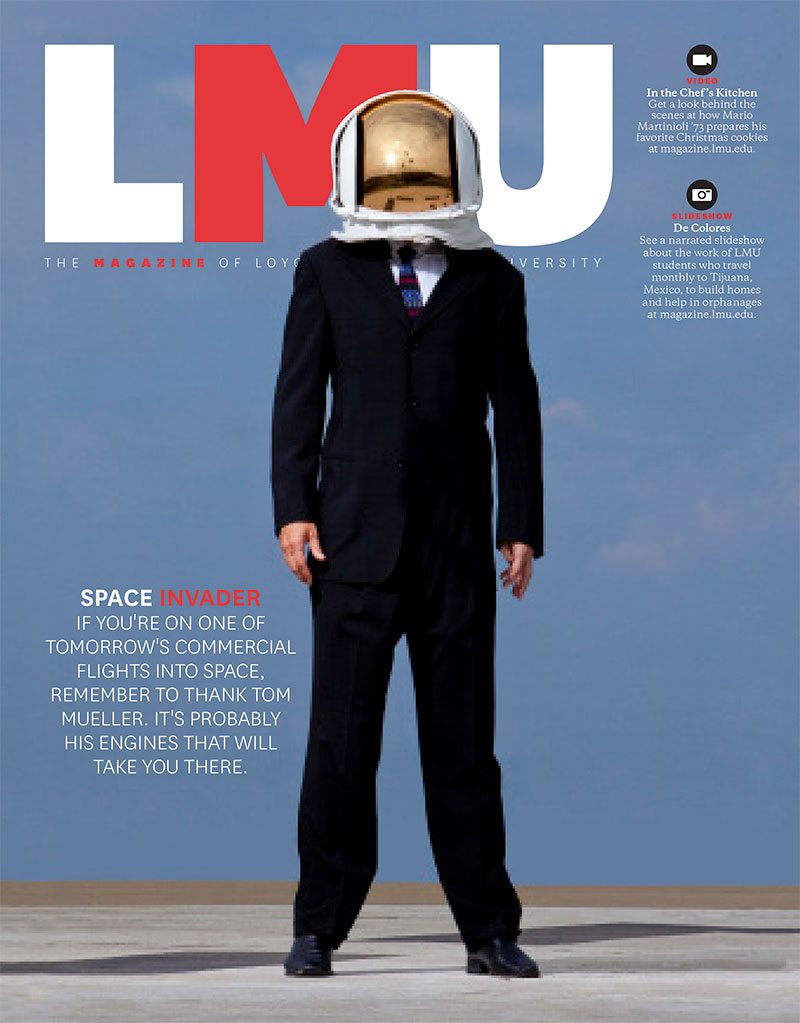 On Saturday, May 19, 2012, Space Exploration Technologies Corp., known as SpaceX, will launch a supply ship carrying hundreds of pounds of astronaut provisions to the International Space Station. NASA is counting on the company, and another private firm, to take over the Space Shuttle’s resupply missions to the ISS. Only nine years old, SpaceX has technologically leapfrogged its competitors to lay claim to the world’s least-costly space flights. One of the brains behind SpaceX is Tom Mueller M.S.'92. He was interviewed by Doug McInnis.

Starting in 2010, LMU began collecting the stories of the university as remembered by alumni, faculty and staff. Seven students, guided by Laurie Pintar, an adjunct professor of history, began the work of assembling memories and reflections of events, milestones and day-to-day life on the LMU campus.

LMU’s athletes are shaping up with a brand-new training facility, one that puts LMU on a par with any other university in the WCC. The Lions Athletic Center is Stage 2 in a process of athletic improvements. Take a close...

Nora Murphy is an assistant professor in the Department of Psychology in the Bellarmine College of Liberal Arts. Her research specialty centers on “first impressions” and how individuals accurately detect the traits and characteristics of others in a social interaction, particularly through nonverbal communication.

A Conversation With Hawley Almstedt

Hawley Almstedt is associate professor in the Department of Health and Human Sciences of the Frank R. Seaver College of Science and Engineering. Her work focuses on bone development and the prevention of osteoporosis. In between her work and maintaining her own active lifestyle, Almstedt also helps run LMU’s Human Performance Laboratory, which offers to the LMU community a range of exercise, fitness and nutritional analysis services. She was interviewed by José Martinez ’11.

A Conversation with Dwayne Hickman ’56

Young Dwayne Hickman was a TV fixture in the 1950s and early ’60s in a supporting role (while a student at Loyola) in the smash hit “The Bob Cummings Show” and the lead — Dobie Gillis — in the groundbreaking comedy “The Many Loves of Dobie Gillis.” Hickman has enjoyed a full career in acting and directing, and another as a painter, which he pursues today. (See his artwork at here.) We spoke to him about both.

Dean Scheibel is professor in the Communication Studies Department and director of Interdisciplinary Applied Programs, both in the College of Communication and Fine Arts. His research interests include the organization of sororities, rock bands, roller derby, surfing and graffiti. He is currently working on graphic novels and plays guitar in the Back Pages rock band. These are some of the books he’s been reading lately. Scheibel gave us six titles, but there was room in LMU Magazine only for the first four below. The other two are included here.—The Editor

In November 1985, a group of Gryphon Circle women decided they wanted to paint a dorm at Rancho San Juan Bosco boys orphanage in Tecate, Mexico, to the east of Tijuana.

The Tale of the Lion

These days, choosing a mascot can mean committees, meetings and rounds of approvals, and a marketing firm to draw 10 increasingly aggressive iterations of your favorite creature of God.

WATTS TOWERS I am the managing director of the Watts House Project, which works with artists, architects and the families across the street from the towers to enhance the local quality of life through the arts and design. The article...

In the print version of LMU Magazine, the names of alumni who have passed away are found in the Dispatches section. We list them separately on the LMU Magazine website to make them easier for readers to find.—The Editor John...

DEAR LMU I never would have guessed that I’d be living in the Mile High City — so far away from my Bay Area home. Peg Dolan, R.S.H.M., always said that our God is a God of surprises! After all,...

A media expert questions why we glorify violence.

In classes on Islamic art and history of the Mediterranean region taught by Aliaa El Sandouby, postcards are a primary learning tool.

Influenced by French New Wave films of the ’60s, John Bailey wanted to become a writer and theorist about changes emerging in American cinema, so he entered a nearby graduate film school in 1965. But a 16mm Bell & Howell with a 100-foot roll of B&W film changed all that

Kristen Tracy likes writing, but she loves telling stories. At the root of her success is her confidence in her stories — she grew up often feeling trapped in a small Mormon farming town, population 841, and turned to her imagination for respite.

On Saturday, May 19, 2012, Space Exploration Technologies Corp., known as SpaceX, will launch a supply ship carrying hundreds of pounds of astronaut provisions to the International Space Station. NASA is counting on the company, and another private firm, to take over the Space Shuttle’s resupply missions to the ISS. Only nine years old, SpaceX has technologically leapfrogged its competitors to lay claim to the world’s least-costly space flights. One of the brains behind SpaceX is Tom Mueller M.S.'92. He was interviewed by Doug McInnis.

Two years ago, an English professor told us that Logan Metz, a singer/songwriter in a rock band that was making the rounds and becoming known in L.A.’s club scene, was among her best Shakespeare students ever. When we learned that Metz’s musical turf was that fertile soil where folk, country, blues and rock co-mingle, we said, “If he combines the Great Playwright with a genre steeped in human stories, then we have to ask him to write about that.”—The Editor

Rowing: It’s All About the Pain

Bo Breitreed ’12, right, and Evan Yates ’11, assistant coach, get in some early morning practice on the waters in Marina del Rey.

The Gift is the Experience

Scholarships helped Frank Amato pay for college. “I got help from the university, and I even borrowed money. I feel indebted to the university. Not only did it give me the best education in the world, but it prepared me for life.”

When Rafael Baca ’11 was signed by the San Jose Earthquakes to a professional contract in July, he became LMU’s ninth soccer standout to go pro. And he joined fellow alumnus Bobby Burling ’06 on the team.

Anthony Kennedy, one of the most important jurists in the United States as associate justice on the U.S. Supreme Court — and often that body’s “swing” vote — gave a keynote address at the dedication of the Loyola Law School’s new Alarcón Advocacy Center Sept. 28. 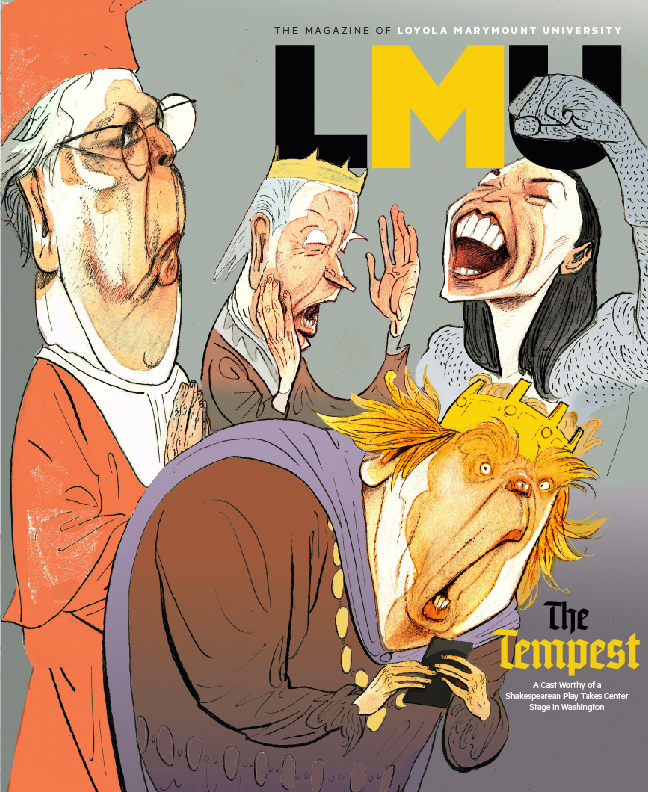 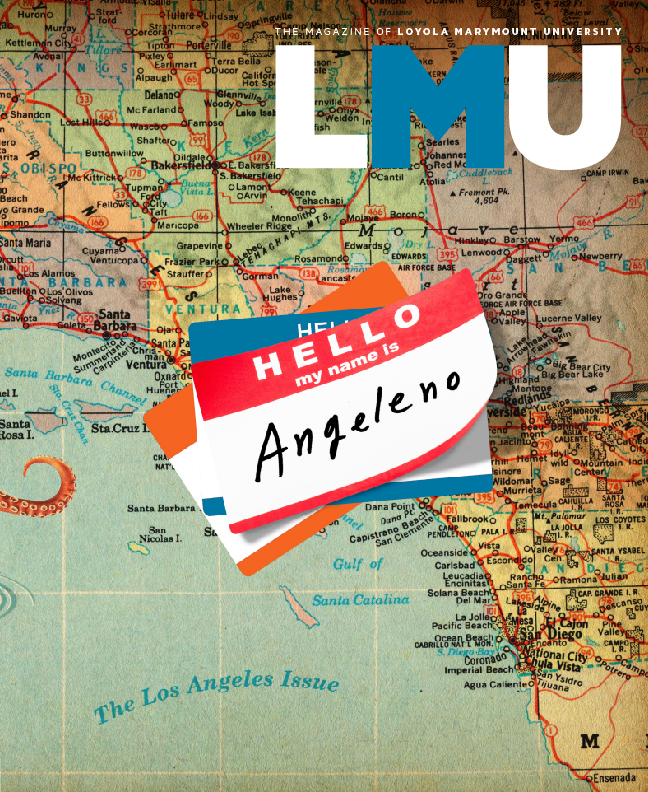 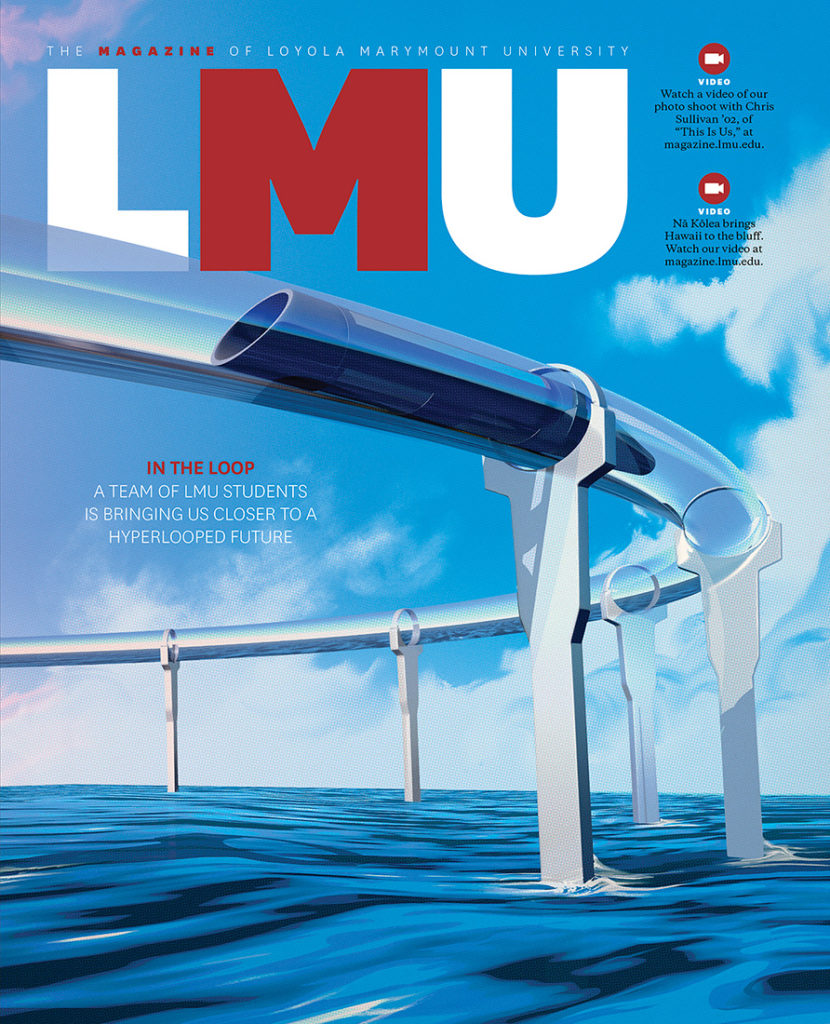 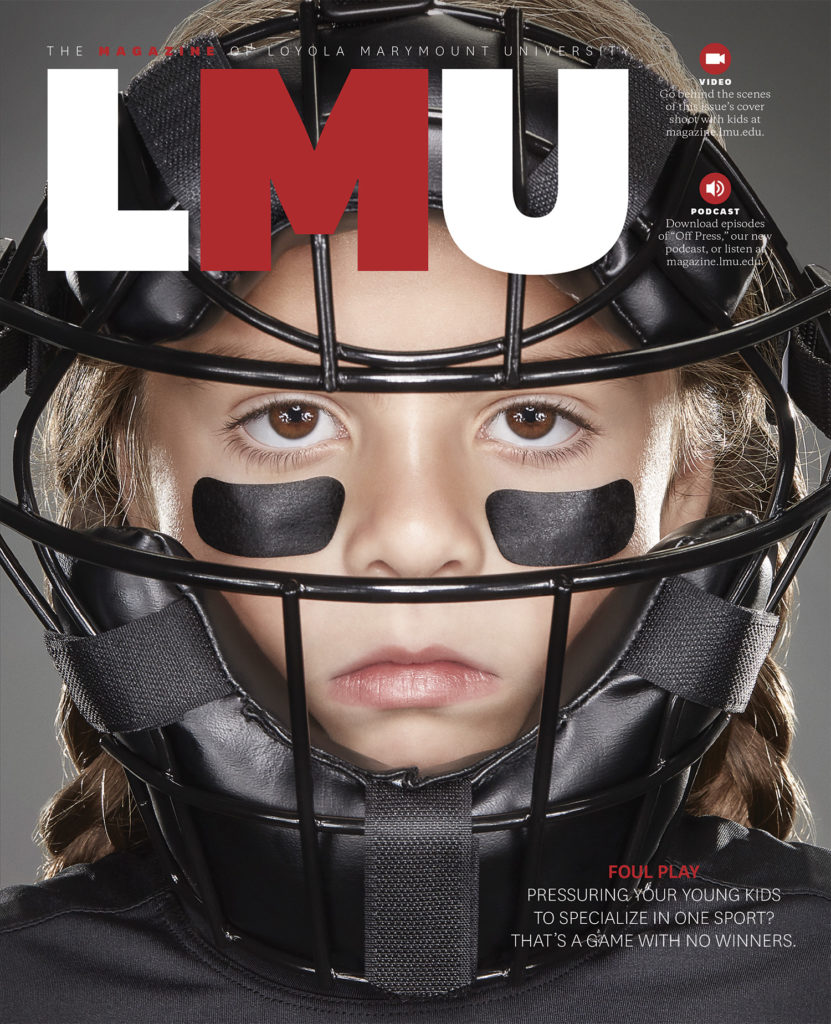 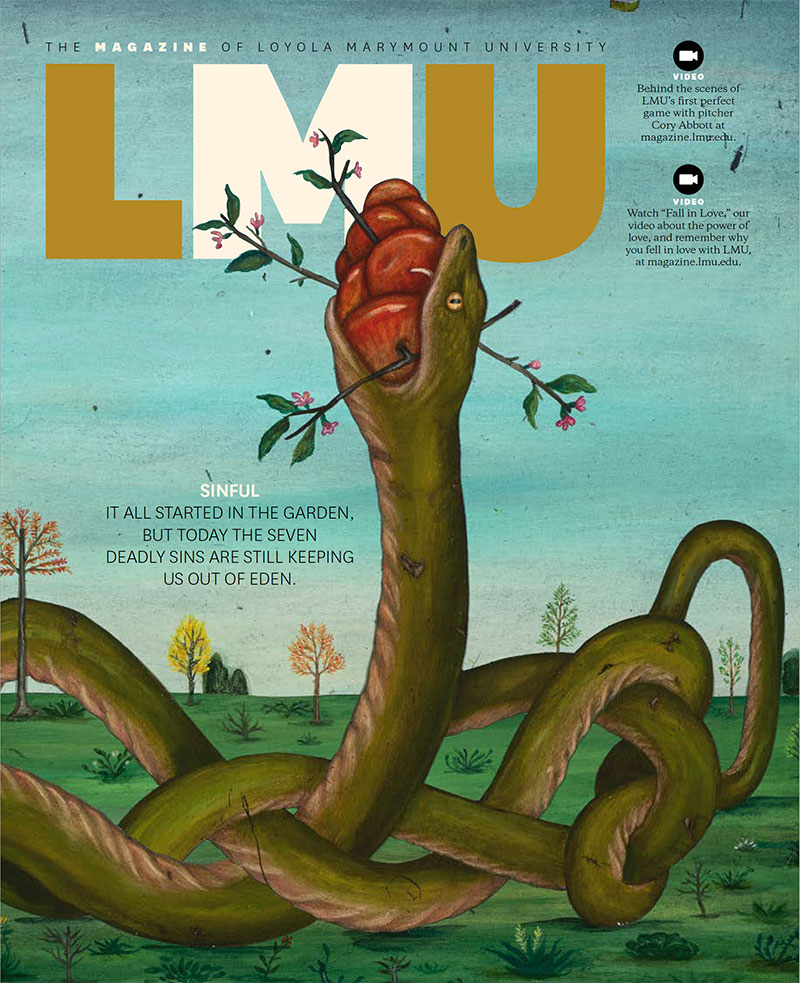 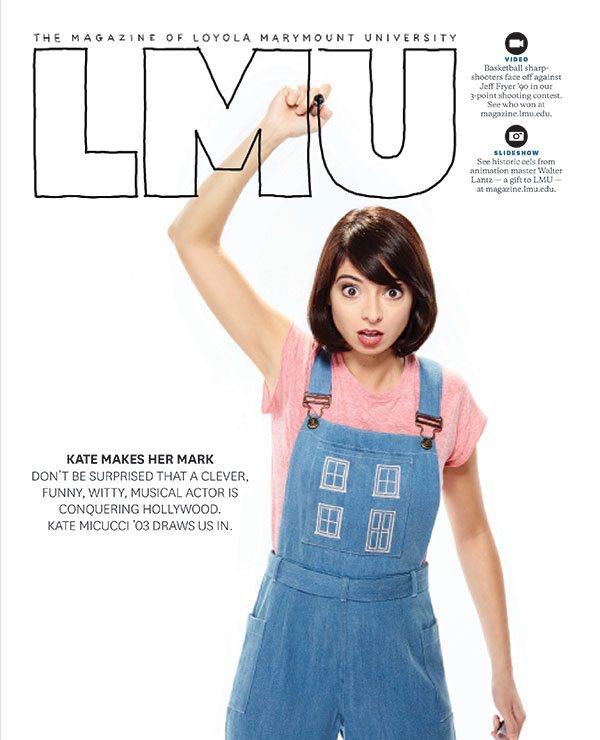